by Ruth Cheesley author page
Comments: Be the first to comment Blog Tuesday, 6 May 2014

Being British has it's advantages. Tea, for one thing, is something I really miss when I'm travelling the world ... good old fashioned tea the way my mum makes it just can't be found! And hobnob biscuits ... mmmmm!

There are some tendencies which aren't so great though, one of which is carrying on in the face of adversity, pushing through difficult times, and coming out the other side better for it. I say this isn't so great, because what happens if the other side never comes?

I'm a stubborn person (much of which I attribute to the aforementioned mother!) and combine this with an ingrained "just get on with it" attitude, and I've managed to cope with some pretty challenging situations without making too much of a fuss. I've lived with Ehlers-Danlos Syndrome (also known as Hypermobility Syndrome) my whole life (despite only being diagnosed at 23, which is pretty common) and over the past five years or so, things have been getting gradually worse.

Dealing with pain and fatigue

I'm not able to walk as far as I used to because my joints are unstable and become painful pretty quickly - nowadays I can only manage around 20-30 minutes - or to stand for any length of time. I experience fatigue on a regular basis, and I'm not talking about feeling sleepy and needing to rest, I'm talking about muscles feeling as though they have run a marathon and physically will not allow me to sit upright, walk, even function as a normal person would expect their body to function. Frustratingly this often happens when I am mentally alert, have a lot to do and damn well want to get on and do it, but I just physically cannot do anything without what seems to be superhuman effort.

So far, I've made do with what I could, in the hope that things would get better .. but there comes a point where you start to get fed up with not being able to do things, having to put up with pain and fatigue just to do what you need to do, and generally avoiding all the exciting stuff I used to do because I know it would cause me difficulties in being able to do my normal daily stuff like going to work!

It's time for action!

So, the time has come for a pre-emptive strike! I've decided (at the recommendation of my GP and physio) that there are times where I simply have to admit that I can't cope with what is asked of me, but I'm not going to let that hold me back. I'm going through the process of having a really awesome Trekinetic K2 Wheelchair made for me which will enable me to do a lot more than I'm able to do right now, and means that when I am at events, conferences and networking I'll be able to focus on why I'm there, rather than trying to find the nearest chair or figuring out how I can stay standing for three hours without collapsing in a wibbling heap of jelly.

Unfortunately (for me!) the guys at Trekinetic are world leaders, innovators, and in high demand, so I had to wait around three months for my chair to be ready.  I am not 'confined to a wheelchair' - I use one when it enables me to do things that 'normal' people take for granted but which I find difficult. I'm 'differently normal', and that's ok.  I might in the future have less need to use a wheelchair, I might end up relying on it more - I just don't know, and I can't know, so I'm focusing on where I am right now. So yes, you will see me walking, and you will see me going up stairs (slowly) and other stuff like that ... and you will also see me using a wheelchair. That's where I'm at right now with my health. Shock realisation moment, not all wheelchair users are incapable of walking! 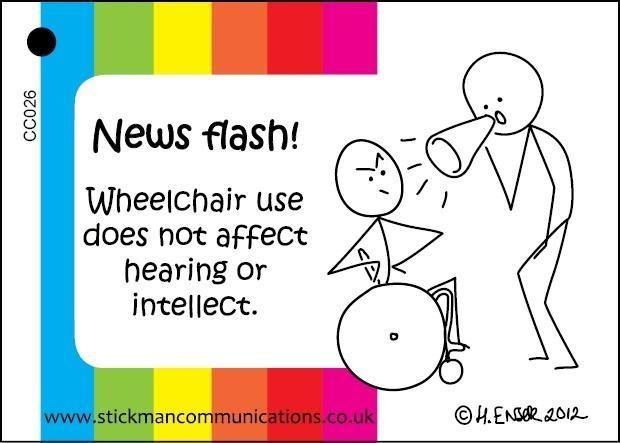 I do appreciate this will be a bit of a surprise for some people, as I'm pretty good at hiding the difficulties I do have (like the 25 tablets a day to control my pain and the oh-so-attractive NHS-issued braces I have to wear!) but I hope that, at the end of the day, you'll understand that I'm just a business person trying to do a job, getting on with life in the best way that I can.

It's going to be a challenge there's no doubt about that, and I have no idea how I'll fare when I have to travel abroad for events, but let's take one thing at a time, and most importantly approach it with a bit of humour, after all, life is better with wheels!

Read more about living my life as a bendie

Read about Hypermobility and Ehlers-Danlos Syndrome

« Have the courage to be fierce with reality Setting icons for desktop shortcuts on KDE - a UI fail? »
Log in