by Ruth Cheesley author page
Comments: Be the first to comment Health and Fitness Thursday, 18 March 2021

Just over a year ago, I strained a muscle in my wrist while caring for a family member following an operation - little did I imagine the journey this would take me on over the course of the next year!

I thought nothing of it at the time, but a few weeks later it was getting progressively worse. As someone who lives with hypermobile joints due to Ehlers Danlos Syndrome, I am used to dealing with strains and sprains, so I just did the usual tape, rest and ice and hoped that it would settle down.

Of course, by this point we were in the grips of a national lockdown and it was not possible to get treatment for several weeks. Eventually, after several months of things not getting better (and it starting to affect being able to lift weights …. thus getting escalated to a major problem!) I was able to access a virtual GP appointment and get a referral to a physiotherapist.

Here came the bad news that anyone who uses their hands for their work dreads hearing … my strain had developed into repetitive strain injury, the position of my ergonomic keyboard was exacerbating the problem, and I had to completely rest my left hand other than the physio exercises for at least 6-8 weeks!

I spend on average about 10 hours a day on a computer. I have been a touch typist for over 30 years, and now, I was only going to be able to use one hand for at least two months ….. Eeek!

How do you type with one hand and not get injured? 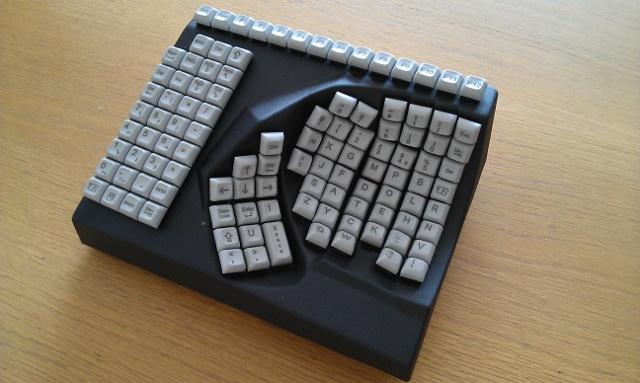 Of course the first thing that any geek does when faced with a challenge is to search the interwebs … and that’s when I came across Maltron for the first time.  A little known business based here in the UK, Maltron makes specialist keyboards, including a one handed keyboard. Who even knew that such a thing existed?!

They have a great facility where they are able to loan out their specialist keyboards for a period of time, which allowed me to get to grips with learning to type with one hand while I was having to rest the other one. The challenge, of course, is that the keyboard uses a totally different layout to anything I had ever used before. 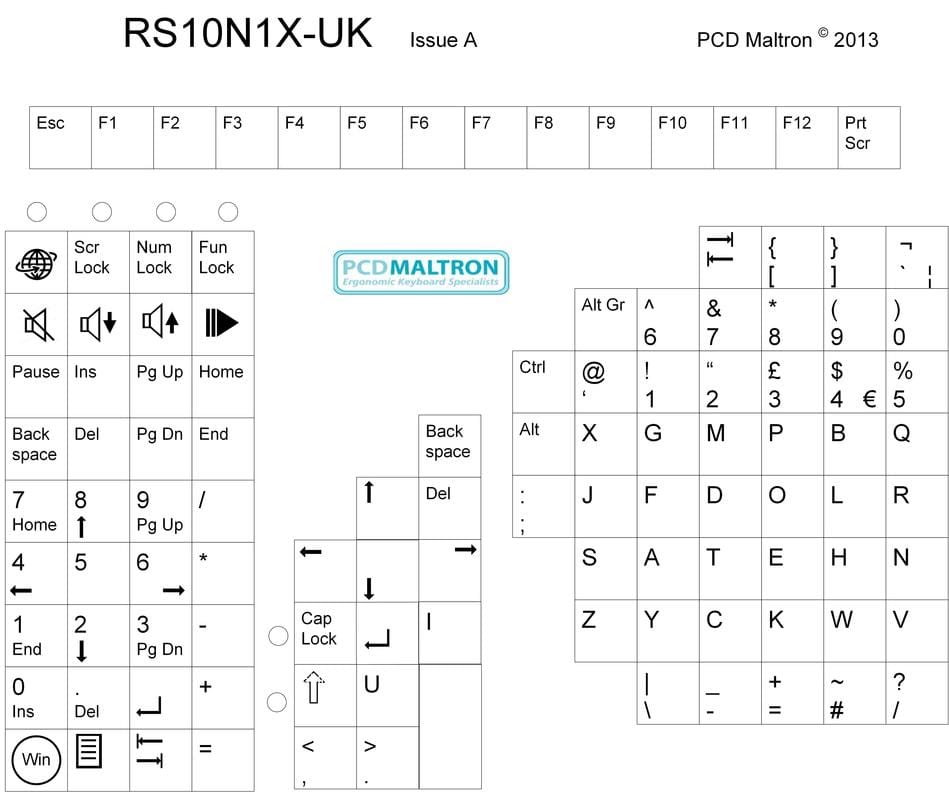 Any time you try to change something that you have done for hours, every single day for the last 30 years, it’s going to take time. Learning to type with one hand was seriously hard work. I could literally feel the brain cogs turning and the neurons rewiring when I was learning to type.

I spent much of the first month using voice dictation any time I needed to write more than a sentence or two, or needed to respond quickly.  I also found the huge value of the facility on a Mac to use shortcuts to expand or correct specific words - for example I was regularly having to write certain responses like ‘please post this on the forums at forum.mautic.org as we use Github for bugs rather than support’ so I just set this as a shortcut on the letters ‘pofmo’. Same with URLs that I often had to type like mautic.org/slack which became ‘sorg’ and Mautic 3 became M3.

I also started making short video logs as I needed to learn how to use the video recording and editing software for my day job, and I couldn’t find anywhere videos from people who were learning to use these keyboards, and sharing their tips and tricks.

You can watch some of my progress in this playlist!

It was really interesting as I got more confident with the keyboard to see just how sensibly the keys were laid out. All the commonly used keys were close to the home keys, so you really minimised the amount you had to move your hands and fingers when typing.

Getting back to two hands

Thankfully after about three months I was able to start using my other hand, initially for an hour a day but then building up over time. This was when I started looking into the two-handed Maltron keyboards and more specifically at alternatives to the traditional Qwerty layout.

Many will be familiar with the history behind this layout which was originally designed to slow down typists to prevent the mechanisms from getting jammed. They did this by positioning the letters frequently occurring together as far apart on the keyboard, reducing the tendency to jam, and thus allowing faster typing - at the expense of having to move and reach much further, and being much less efficient for the typist.

Several alternative layouts have been created over the years, including the most popular ones like Dvorak and Colemak, and more recently the Maltron layout.  Created based on scientific studies into the frequency of use of each letter, the layout is designed to be the most efficient and least strenuous layout for the typist. 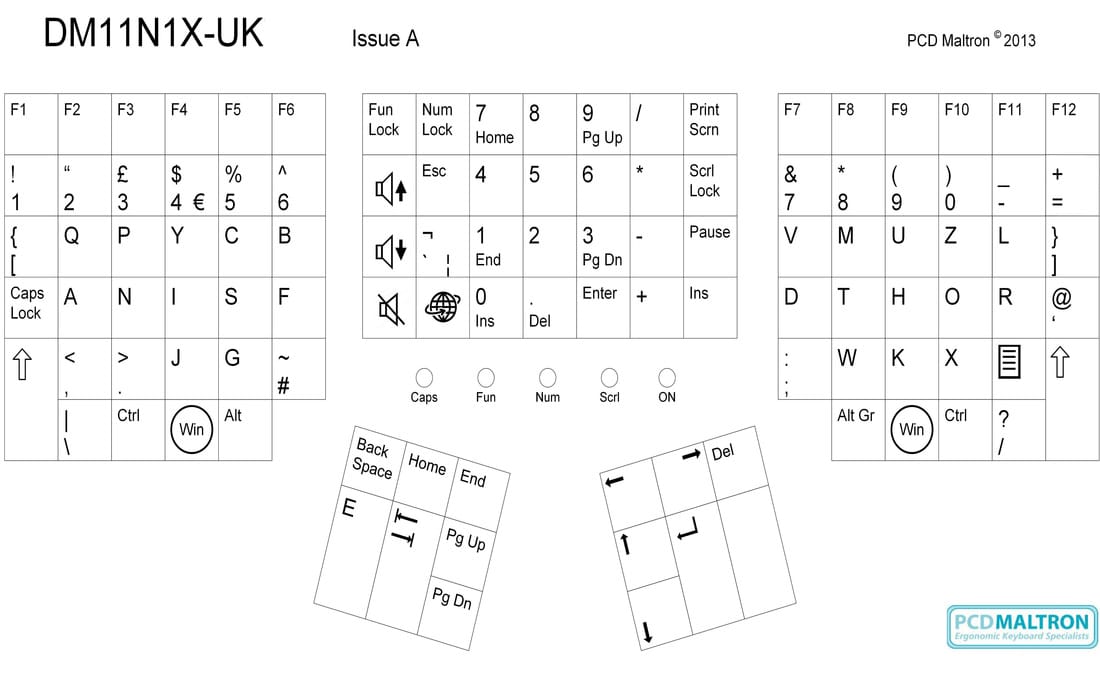 The more I looked into it, the more fascinating it was at how we have had the Qwerty layout forced on us by the world of computers when it’s actually not the most efficient layout - and nobody has ever really questioned it!

As I started to shift back to two-handed typing I had to find a keyboard that would allow my wrist to be in a completely neutral position, and the Maltron keyboard fit that bill perfectly. I figured that I had already learned a new layout with the one-handed keyboard so learning a new two-handed layout wouldn’t be too hard, right?

Switching to the Maltron layout

Learning a new layout with both hands was much harder than learning the one-handed layout, probably due to the 30+ years of practice using Qwerty! It was frustratingly slow going at first, and I spent hours doing typing drills in the evenings to get the muscle memory of where the common keys were located.

I wonder sometimes if there are some parallels between this and learning a new language. It feels very much like I am having to type in a different language when I am using the Maltron layout, my brain has to think differently and it’s very much something I have to bring a lot of conscious awareness to, because the muscle memory is still not quite there. Increasingly I am finding that when I have to switch back to my ‘native’ qwerty layout, I have to work really hard to remember where the keys are and frequently get muddled with the Maltron layout!

After nearly 6 months of being back at two-handed typing with the Maltron layout (now using a Kinesis Advantage 2 keyboard remapped to Maltron as I couldn’t get on with the actual Maltron keyboard itself and this allowed me to slightly customise the layout for my own needs) I have to say I am really impressed by the efficiency of typing with this layout.

Although I am still learning and becoming more confident with typing in a ‘new language’, I’m definitely noticing that I am moving my hands much less when I am typing with Maltron, and now that I know where the majority of the keys are located my WPM speed is definitely increasing.  I still have pain in my hands, which is probably not going to go away, but I am definitely finding that I am less tired and less achy nowadays.

It has been quite a journey and at times has been incredibly frustrating, but I hope that this switch to a more optimised layout will mean that in the longer run my hands will be less painful and I’ll be protecting them from the extra wear and tear of using an inefficient layout like Qwerty!

Have you tried other layouts? Are you a fan of one or the other? I’d love to hear in the comments!

« How my wheelchair gave me back my life, my health, and my dignity
Log in